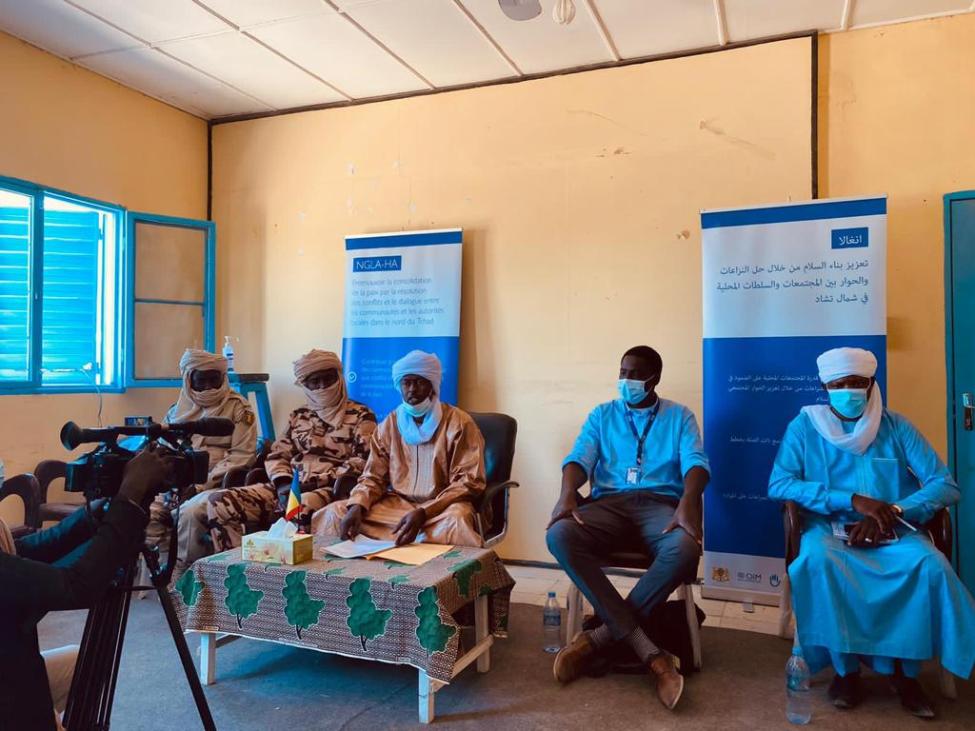 Faya-Largeau – A new 30-months project jointly implemented by IOM and the NGO Humanity & Inclusion will support community participation and social cohesion in the Chadian northern provinces of Borkou and Ennedi-West.

The project “Promoting peacebuilding through peaceful conflict resolution and dialogue between communities and local authorities in Northern Chad”, also named Ngla-Ha, which translates as “peace” in Chadian Gorane language, is funded by the UN Peacebuilding Fund and will seek to contribute to the resilience of communities in their response to conflicts by promoting community dialogues and supporting “peace dividends” based on the needs of various community groups.

Through the project, new mechanisms for trust building between actors at local and national levels will be established, allowing local and national stakeholders to jointly identify the root causes of conflict, with a particular focus on its impact mobility in the region. This includes the establishment of local inclusive committees, and the setting-up of a feedback and complaint management mechanism. Further to these mediation activities, the Ngla-Ha project will also support the setting up of “peace dividend” activities by supporting local development projects jointly developed by and benefiting local communities.

“This initiative is unique, and IOM is happy to make available its expertise in partnership with Humanity & Inclusion to support community participation and development in northern Chad”, said Anne Schaefer, IOM Chad’s Chief of Mission.

The project will also offer specific training on border management, including the identification of fraudulent documents, the referral of victims of trafficking, and the integration of migrant protection and assistance in interviewing techniques. Training on border management will be supplemented by training in mediation, human rights, prevention of gender-based violence, non-violent communication, and de-escalation techniques to contribute with the aim of improving trust between the local population and the security forces.

The vast B.E.T region borders Niger to the West, Libya to the North and Sudan to the East, and as such is characterized by multiple migration dynamics, including, among others, transhumance, and circular migration. Since the start of the gold rush in 2013, new migration dynamics have emerged, including among others, the irregular migration of Chadians and third country nationals towards artisanal gold mining sites. As in other countries of the Sahel, the discovery of the precious metal and the gold rush that followed upended socio-political relations and had an impact on the stability of the region.

Since 2019 and through various projects, IOM has worked to support community stabilisation and youth participation in Northern Chad through, among other things, strengthening border management, the establishment of community gardens, support to youth associations and the rehabilitation of common structures encouraging social cohesion among community members.