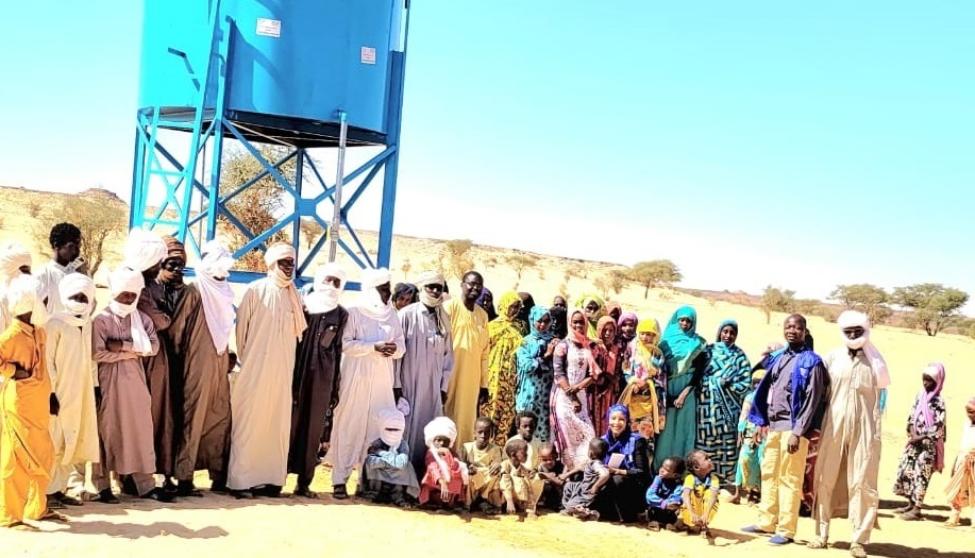 The new water tower built by IOM in Innou 2 village. The water tower has a capacity of eleven cubic metres. 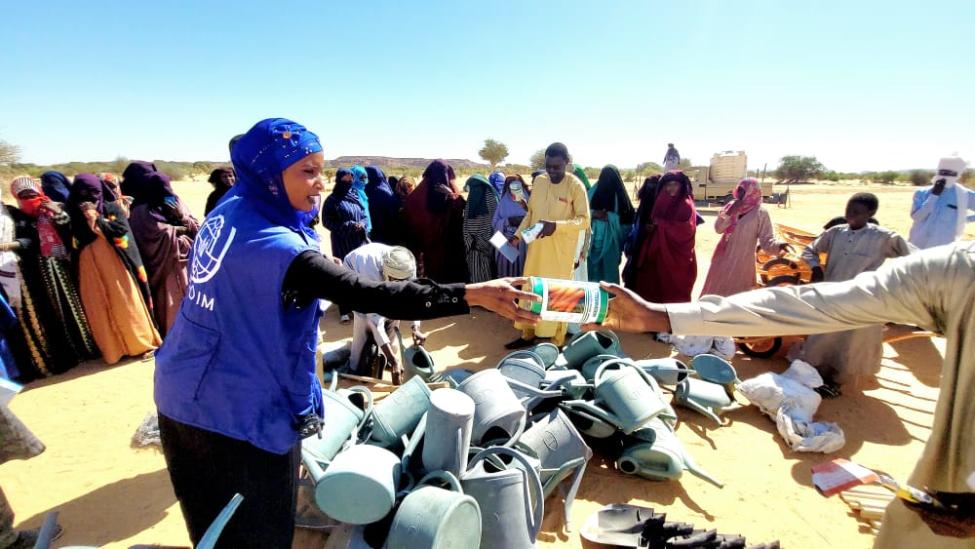 Handover of agricultural and phytosanitary equipment to local people in Innou 1 village.

Innou – In an effort to strengthen community-based development and promote resilience in Innou 1 and Innou 2 villages located in the Ennedi West Province, the International Organization for Migration (IOM) donated several socio-community assets on Wednesday, 9 November 2022.

Located more than 20 kilometres from Fada, the capital of the Ennedi West Province in the Far North of Chad, Innou 1 and 2, which together host a population of nearly 2,000 inhabitants, have been facing major challenges related to access to drinking water for several years. To address this issue, IOM built a water tower with a capacity of eleven cubic metres to enhance the populations’ access to drinking water.

For Innou 2 village Chief, this water tower is a miracle: “We never thought we would have a water tower in Innou 2!” Equipped with a solar pumping system, the water tower will facilitate water supply and distribution to the local population. “So far, we have been drinking the same water as our cattle, but now we have drinking water”, says the village Chief.

In Innou 1, a borehole equipped with a solar power system and large water storage basin have been handed over to the local authorities and communities to foster agriculture and market gardening. Seeds, market gardening tools and various phytosanitary products were also provided to local farmer groups to enable them to intensify their production.

In Northern Chad, IOM, supported by the German Federal Ministry of Foreign Affairs, has been implementing the project “Balke – Security and Stability in Northern Chad” through which it is conducting various actions aimed at improving human security, stimulating local socio-economic development, and increasing access to basic social services as well as economic opportunities for youth and women.

Through this project, more than 111 young people received certification training in information technology, electricity, carpentry, tailoring and auto mechanics through the Technical and Vocational Training Centre in Faya, which was rehabilitated and equipped by IOM.

“Community stabilization is essential as it lays the foundation for long-term development,” says Anne Kathrin Schaefer, IOM’s Chief of Mission in Chad. “Our approach focuses on community-based planning and recovery as well as quick impact interventions to restore livelihoods and promote access to basic services for all,” she adds.

The project has also supported the construction and rehabilitation of several social structures including boreholes, water towers, schools, health centres, and community-based markets to provide people with the services they need to thrive.

IOM, Kingdom of the Netherlands to Support Community Stabilization in Lake Chad Basin