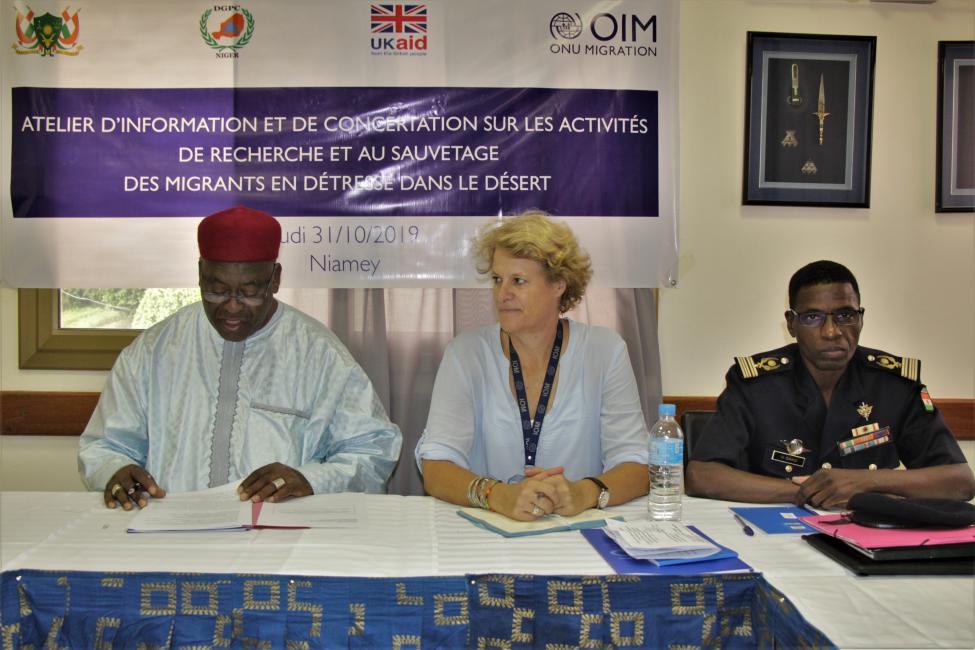 Niamey – On October 31, the General Directorate for Civil Protection (DGPC) organized in Niamey, with the technical and financial support of the International Organization for Migration (IOM), a workshop on search and rescue operations for migrants in distress.

In March 2019, IOM and the DGPC signed a second agreement to respond to the migratory flows on the Assamaka-Arlit axis so as to jointly conduct Humanitarian Rescue Operations.

The main purpose of the workshop was to review the status of search and rescue operations for migrants in distress, to outline the main challenges encountered and to determine possible improvements.

IOM’s search and rescue missions are funded through the support of the Government of the Netherlands, the United Kingdom’s Department for International Development (DFID) and the European Union.

During the presentations and the exchanges that followed, several challenges were raised such as the vast surface needed to be covered, the difficult weather conditions due to average daily temperatures of 45° C, the security situation (especially on the Assamaka-Arlit axis) and the cost of military escorts.

The adoption of the law N° 2015-36 criminalizing irregular migration in Niger has also led to the multiplication of the routes taken by migrants which has created additional challenges for search and rescue missions.

“It is tragic that so many people are losing their lives in the desert each day,” said Sadou Soloké, Governor of the region of Agadez. “We all need to do our best to support the common goal of saving lives,” he added. During the workshop, the Governor also mentioned his appreciation towards the collaboration with IOM and the successes in terms of numbers of migrants rescued brought on by this collaboration.

Adamou Ider, the Secretary General of the Ministry of Interior, Public Safety and Decentralization of the Government of Niger, also praised the fruitful cooperation between IOM and the DGPC and emphasized the need to strengthen the resources of the DGPC and other relevant actors. He also considered relevant the idea of developing a national strategy for search and rescue missions for migrants in distress.

Among the ways to improve and optimize search and rescue missions mentioned during the workshop, were the use of new communication tools and technology, more upstream planning of operations, and the development of a National Civil Protection Strategy.

“The combined efforts of the Government of Niger and IOM have contributed to close to 25,000 lives saved since the beginning of the operations,” said Barbara Rijks, IOM’s Chief of Mission in Niger. “These life-saving operations need to be conducted in a timely manner, and this can only be possible through the effective collaboration of all stakeholders.”

At the end of the workshop, the participants agreed on several key recommendations, pending the development of a more detailed roadmap in the coming months.

Existing processes and frameworks for search and rescue activities will be documented every step of the way in order to define the stakeholders and their respective level of involvement, respecting the authorities' prerogatives at all levels and in line with the situation on the ground.