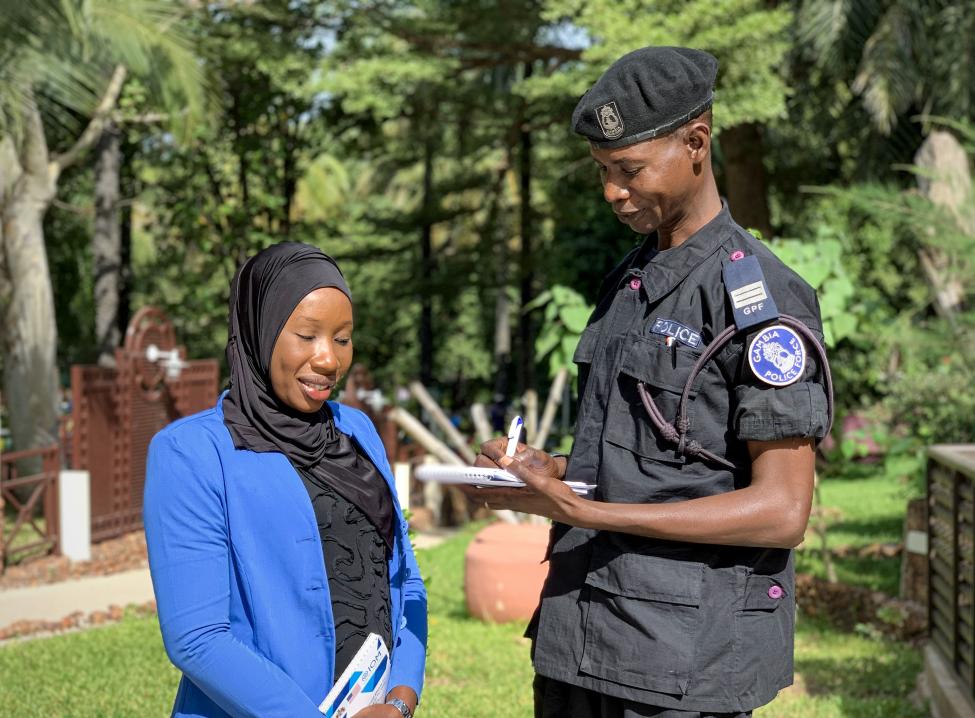 Banjul – As the tourist season in The Gambia comes to full swing, the industry is widely regarded as a potential hotspot for exploitation in the country, in particular child sex tourism.

In response to the need of security officials for enhanced capacities to identify and report human trafficking cases, the International Organization for Migration (IOM), the Gambia Tourism Board, the Office of the President and the National Agency Against Trafficking in Persons (NAATIP) hosted a three-day training from 2-4 December for 27 Tourism Security Unit (TSU) personnel to better understand trafficking in persons (TIP), identify suspected cases and refer victims to social welfare authorities for assistance.

This training is the first in a series of capacity building initiatives aiming at supporting national efforts to combat trafficking in persons, through a three-year project funded by the US Office to Monitor and Combat Trafficking in Persons.

“Your job is a very important one—providing a relaxing and pleasurable experience for tourists, while also protecting and ensuring the safety of those working and resident in The Gambia,” Ambassador of the US Carl Paschall III reminded the trainees. “It is not just a training, but what you all of you here today do with the training; what actions are undertaken to prevent this trafficking, this exploitation, this ruining of lives from happening and how we are holding the perpetrators of this crime accountable,” Ambassador Paschall further emphasized.

Musa Player, Chief Inspector at TSU recalls a tip-off regarding a minor suspected of being a victim of child sex tourism two years ago. “After investigating and corroborating the information we received, I deployed my team to make the arrest and referred the perpetrator to the area police station,” recalls Chief Inspector Player.

“There were some things we didn’t know about how to ensure a victim receives appropriate protection,” says Player after attending the training. “This tourist season, I have to relay everything I learned to my team, so that if they encounter a suspected case of trafficking, they can handle it better,” he added.

As the law enforcement body of the Gambia Tourism Board, the TSU personnel trained is composed of immigration, intelligence, police and drug law enforcement officers with the specific role of ensuring the safety of Gambian tourist areas.

As of the end of December 2018, The Gambia had recorded 219,000 international tourists and the tourism industry accounted for up to 20% of the country’s GDP.

The training comes following recommendations made by the United States’ 2019 TIP Report, which downgraded The Gambia to Tier 3 status—the lowest possible rank. The report’s recommendations include fully investigating cases of child sex tourism, completing trafficking prosecutions and expanding assisting offered to victims. The partnership between IOM and the Gambia Tourism Board came as a result of discussions at the National Task Force to Combat TIP, revived this year, in which the tourism sector was recognized as a crucial vantage point in counter-trafficking efforts.

With the revived task force, government stakeholders are ready to act on the recommendations. “In order for The Gambia to successfully combat trafficking, strong partnerships among the police, government and civil society are needed. It was thus urgent for us to collaborate in rolling out this training program for tourism security personnel,” remarked Abdoulie Hydara, Director-General of the Gambia Tourism Board.

“Law enforcement officers in the tourism sector play an integral role in combatting trafficking. They are at the frontline of ensuring our tourist areas are safe from any predation of human traffickers,” remarked Etienne Micallef, speaking on behalf of IOM’s Chief of Mission in The Gambia, at the launch of the training.

In the coming months, IOM and government partners will work closely on various initiatives aimed at strengthening prosecution efforts through increased identification and investigation capacities; protection services for victims; and prevention activities through awareness raising campaigns.