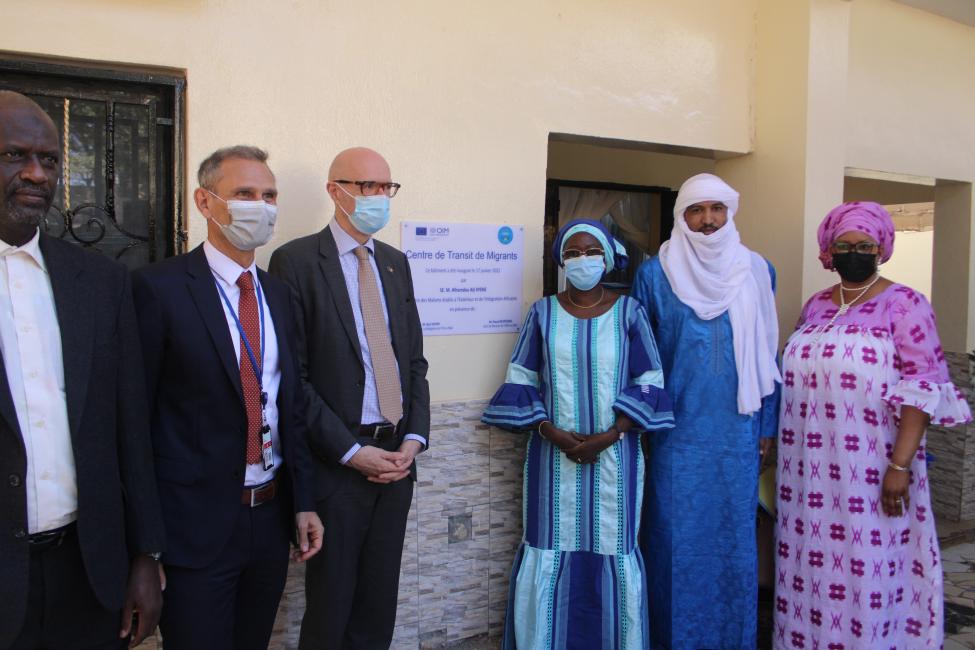 As it inaugurates this new centre in Bamako, IOM Mali strengthens its capacity to assist and protect migrants in vulnerable situations @IOM2022 Moussa TALL 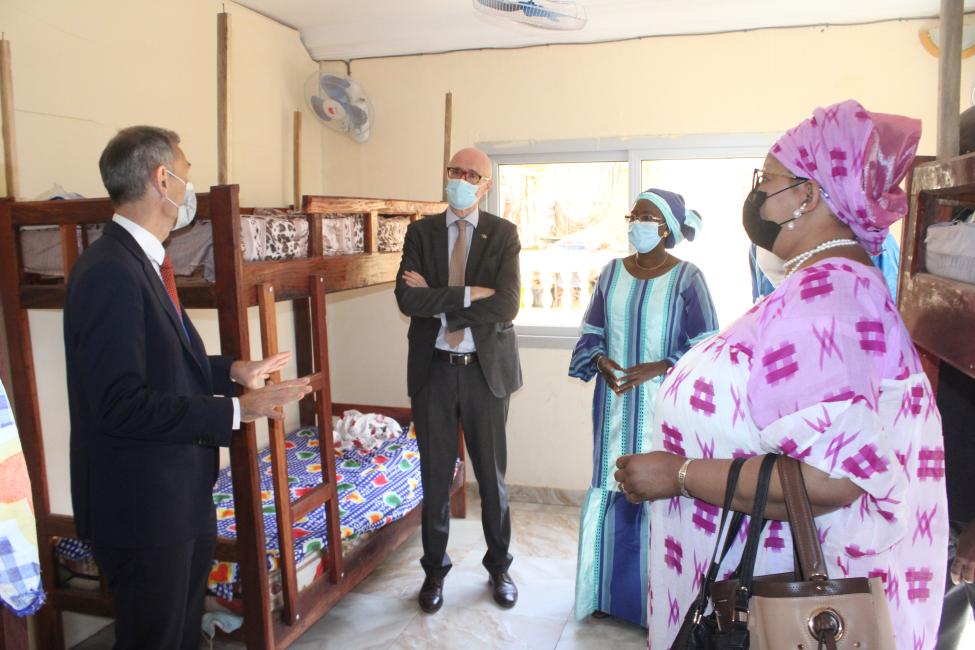 In Bamako, the Chief of Mission of IOM explains the services offered by the newly inaugurated migrant transit centre to the Ambassador of the European Union Delegation and the Secretary General of the Ministry of Malians Abroad @IOM2022 Moussa TALL 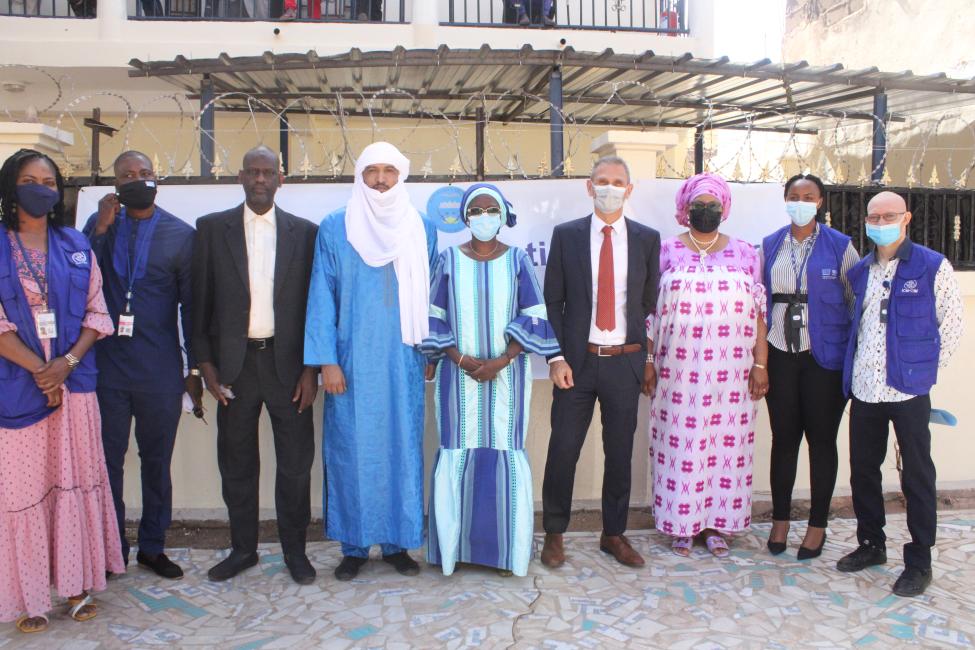 Bamako – On 17 January, the Secretary General of the Ministry of Malians Abroad and African Integration, Mrs Nema Guindo TANGARA, inaugurated a new migrant transit centre in the presence of the Ambassador of the European Union Delegation to Mali, Bart OUVRY, and Chief of Mission of the International Organization for Migration (IOM) in Mali, Pascal REYNTJENS.

The accommodation of migrants in transit, pending their return to their country or community of origin, is an important part of support provided by IOM Mali to facilitate their voluntary return and reintegration, but also to assist victims of trafficking or unaccompanied minor migrants.

“According to the ECOWAS Commission, 84% of migration flows in West Africa are between countries in the sub-region. This centre inaugurated under a challenging situation for our country, which is currently hit by ECOWAS and WAEMU sanctions, further illustrates our proven pan-Africanism. These migrants who will temporarily stay in this centre will not be considered as foreigners but as African brothers,” declared Mrs Nema Guindo TANGARA, Secretary General of the Ministry of Malians Abroad and African Integration.

IOM has established 16 transit centres, one of which is for Malian returnees, with a capacity of more than 200 people, managed by the Government in partnership with the Organization. Five of the other 15 centres, dedicated to the reception and protection of non-Malian migrants in transit, are located in Bamako with a capacity of more than 200 people. The remaining centres are located in the regions, including 1 in Kayes, 4 in Gao, 3 in Timbuktu and 2 in Mopti. Two of them are managed by IOM including the centre inaugurated today. The other 13 are managed by NGO partners, specialized in different types of assistance based on migrants’ vulnerability.

“Overall, the transit centres for non-Malians currently host more than 230 migrants, including about a hundred Guineans. Before the ECOWAS sanctions hit Mali, IOM had scheduled more than 100 returns this January. We are continuing discussions for the organization of humanitarian flights in order to avoid overcrowding in the transit centres and keep on providing reception and assistance to vulnerable migrants during this period marked by restrictions,” stated Pascal REYNTJENS, Chief of Mission of IOM in Mali.

The renovation and equipping of this new transit centre were made possible thanks to the financial support of the European Union through the implementation of the EU-IOM Joint Initiative for Migrant Protection and Reintegration in Africa. This is in line with the standards set out in the new IOM practical guide for migrant centres.

“Migrants in transit will now be able to be accommodated in this newly renovated and equipped centre, which offers them a safe environment and allows IOM staff to assist them in the best possible way,” said the Ambassador of the European Union Delegation to Mali, H.E. Mr Bart OUVRY, reminding us of the importance of the centre, highlighting the efforts made by the European Union in Mali and in the region to provide assistance and facilitate voluntary return of vulnerable, transit and stranded migrants.

Built on an area of 584 square metres, the transit centre has a capacity of hosting 55 people (reduced to 46 during the COVID-19 pandemic to observe social distancing measures). The ground floor consists of 4 rooms for 18 people and a large TV room. The first floor consists of 5 rooms for 28 people, also with a TV room. The second floor has a large hangar which can be used as a space for resting or playing.

The centre always operates 24 hours a day with 6 security agents, 4 during the day and 2 at night. In addition to IOM staff who work at the centre from Monday to Friday, a rotation system has been put in place to ensure the centre is staffed at weekends. Migrants in transit at the centre are provided with free food and accommodation. They are also provided with hygiene kits and non-food items, medical care and psychological support for those who need it.

“I am happy to be in this centre and in a safe place. Everything is going well, but morally I don’t feel well because I am eager to return to my country and we count on IOM to get us home soon. I hope that I will be able to see my family again very soon,” said Ousmane Diallo, a Guinean migrant in the centre.

Since 2017, more than 3,649 migrants in transit in Mali have been accommodated in IOM centres while awaiting the organization of voluntary return to their country or community of origin under the EU-IOM Joint Initiative for Migrant Protection and Reintegration in Africa.