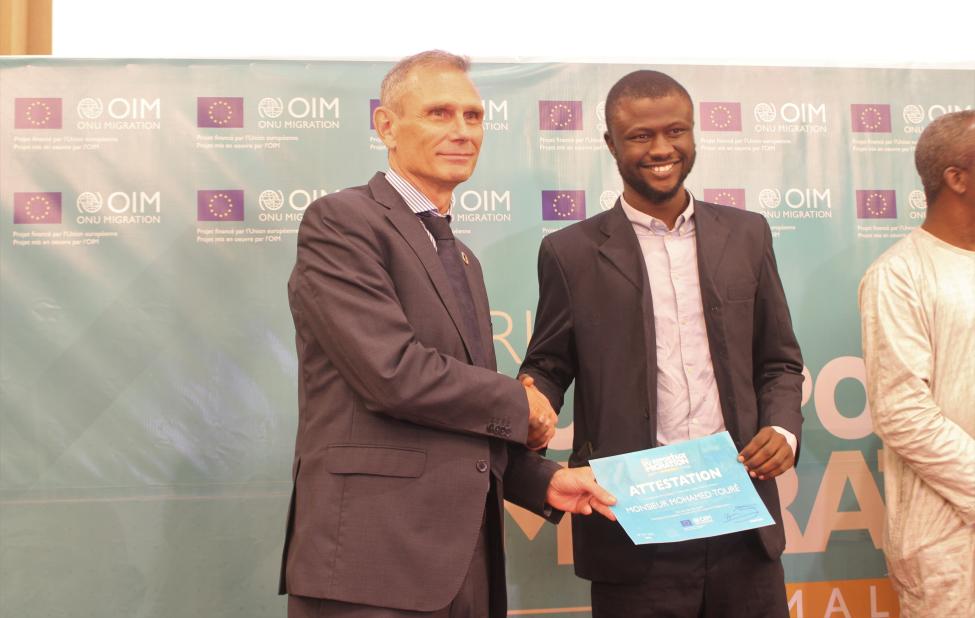 Sokona KAMISSOKO, Winner in Radio receives her award from the First Counsellor of the European Union Delegation to Mali @ OIM 2022/Moussa Tall Malian winners of the Reporting Migration Competition, the jury and officials at the end of the ceremony @ IOM 2022/Moussa Tall

Bamako – The International Organization for Migration (IOM) in Mali and its partners awarded 11 journalists for their quality reporting on Thursday, July 7, in Bamako, during a ceremony that concluded the Malian edition of the Reporting Migration Competition, launched in several West and Central African countries. The award ceremony marks the outcome of a process that began on May 3, in Mali, with the publication of the call for applications.

Malian journalists or journalists working for local media had until June 10 to express their interest and submit their entries, which should include a content on migration, published between January 2021 and June 2022, in the Print, Online, Radio and Television categories. Out of 40 entries received, 18 were selected and submitted to a jury made up of media professionals and migration specialists for assessment. The final deliberation focused on five entries from the print category, six from the online category, five from the radio category and two from the television category.

Based on the competition criteria, the jury selected the three best entries in each category, except for television, which had only two eligible entries. In total 11 entries were awarded.

In the television category, the two winners are respectively Arouna SISSOKO of TV5 Monde and Mohamed DAGNOKO of Vox Africa.

IOM Chief of Mission in Mali, Pascal REYNTJENS congratulated the winners and called on the Malian media to continue to produce quality reports that reflect the principle that safe and orderly migration fosters prosperity, innovation, and sustainable development. “I encourage the Malian media to persevere in reporting on migration, to contribute to overcoming of negative perceptions,” he said, before reiterating his team’s readiness to provide journalists with the necessary contents to convey the right information to their media listeners, readers, and viewers.

The Reporting Migration Competition is part of activities under the EU-IOM Joint Initiative for Migrant Protection and Reintegration. It aims to contribute to a better understanding of all aspects of migration, allowing for a more balanced coverage of migrants’ stories in West and Central Africa. During the award ceremony for the winners, the First Counsellor of the European Union Delegation in Mali, Michel KNOOP, highlighted three aspects that make this competition unique. “Firstly, the promotion of quality reporting on migrant reintegration and protection. Secondly, solutions journalism, which aims to identify and provide solutions to the main societal challenges. And thirdly, the balanced and ethical way of sharing accurate aspirations, informed choices, and fair stories, to preserve migrants’ dignity.”

The representative of the Minister of Malians Abroad and African Integration also stressed the importance of the competition. “It is in line with the National Policy on Migration (PONAM) and Global Compact on Safe, Orderly and Regular Migration,” said Foussseyni SOGODOGO, General Delegate for Malians Abroad.

In addition to the certificates, a package of USD 8,000 was awarded to the winners.

Strengthening Land Border Security: Togo Soon to Have a Border Control Post at Pogno in the Prefecture of West Kpendjal