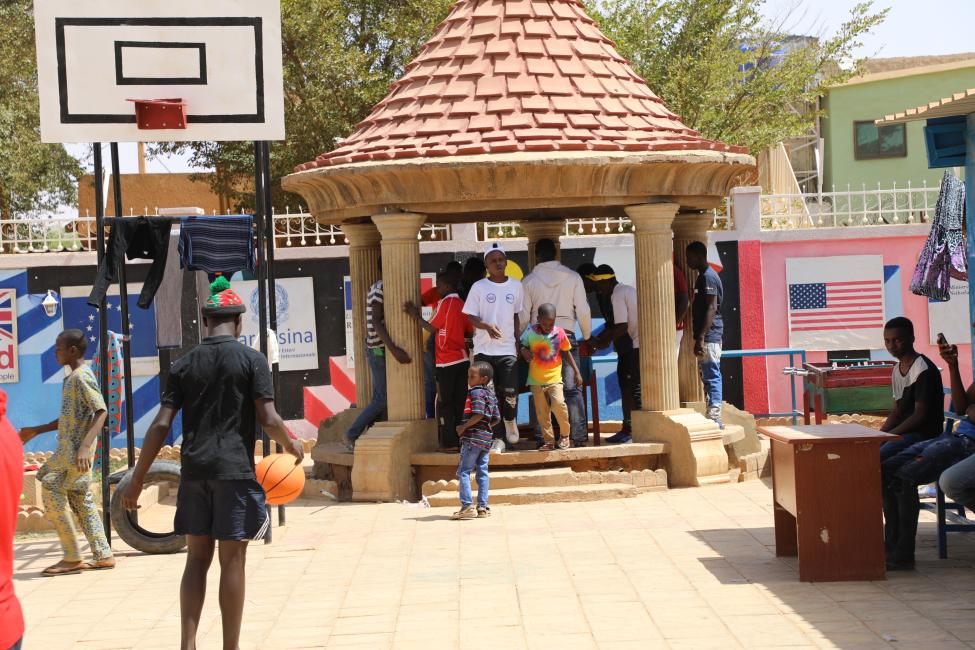 Niamey – The International Organization for Migration (IOM) organized this month (14/02) a fair at its transit center for unaccompanied migrant children and families in Niamey with the objective of creating a better relationship and understanding between the migrants residing at the transit center and the community members living in the same neighborhood.

The migrants themselves were the ones who set up the games for the day such as the pétanque, bowling, sack race, card and candle games and musical chair, and were also involved in the distribution of the prizes to the participants.

Last summer IOM opened a new transit center in Niamey, where unaccompanied migrant children and families are hosted together, as they await their return to their country of origin, through the Assisted Voluntary Return and Reintegration (AVRR) programme, under the EU-IOM Joint Initiative for Migrant Protection and Reintegration.

In this center IOM Niger hosts unaccompanied migrant children and families together, creating a more family friendly environment for the migrants.

The new center is supported by the United Kingdom’s Department for International Development (DFID) through its project “Safety, Support and Solutions in the Central Mediterranean Route”, within the framework of IOM Niger’s Migrant Resource and Response Mechanism.

This new shared space has been a welcome addition as families have their own rooms and cohabit peacefully with the unaccompanied migrant children living on the first floor.

In order to avoid possible tensions with the neighbours, IOM prioritizes social cohesion.

“The problem we often encounter is that neighbours are fearful of the migrants staying at the transit center because they see them as foreigners with whom they have nothing in common,” said Ouali, Manager for IOM’s transit center in Niamey. “By organizing joint regular events such as this one, we are aiming at bringing together the two communities.”

The unaccompanied migrant children who are currently attending professional training sessions in welding, mechanic, electricity, plumbing, carpentry and tailoring at the training center of the National Museum in Niamey invited their teacher and classmates to attend.

This activity was also attended by the staff of IOM’s two other transit centers in Niamey as well as its community mobilizers, and parents and children from the neighbourhood or surrounding schools.

The neighbours’ feedback has been positive and encouraging so far. “It’s nice to have such a friendly atmosphere in the neighborhood,” said Adamou, one of the residents. “We would be happy to attend again.”

A few days after this activity, the changes were already noticeable: people recognized and greeted each other in the street, sometimes even stopped to chat. Fast-forward a few weeks later and the migrants and IOM staff are invited to neighborhood festivities such as baptisms or weddings while the neighbours are invited for tea or to join the films screenings at the transit center.

“When I walk in the neighborhood nowadays, people see me and know where I come from. They know that I am a migrant, they know that I am staying at the transit center and they know which country I am from,” said Assan, a Gambian migrant who has been staying at IOM’s transit center for the past three weeks as he awaits for his return. “If I see they have any issue, I will come and help them out because I know who they are now, and I hope they do the same for me.”

“Social cohesion does not take place overnight; it’s a long-term process that requires a lot of efforts,” explained Barbara Rijks, IOM’s Chief of Mission in Niger. “Activities like these are an excellent starting point to create dialogue and interaction between migrants and their host communities,” she added.