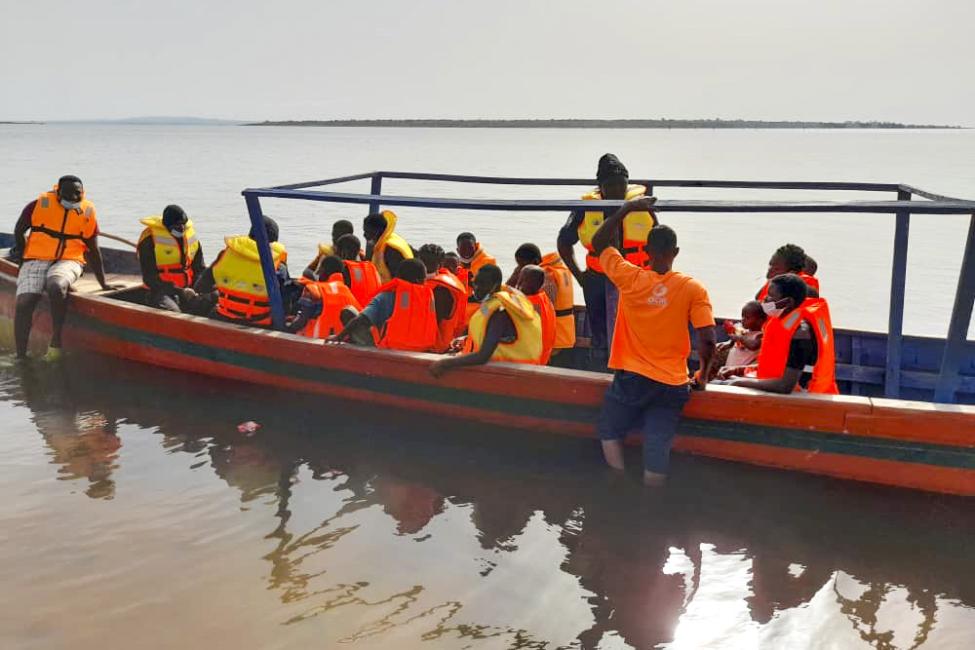 Rescue team and children boarding a boat on the shores of Volta Lake, Ghana. Photo: IOM

In March 2021, the Ghana Police Service (GPS) rescued 18 child and teenager victims of trafficking, including two babies (whose mothers were among those rescued), in the Bono East region of Ghana. The International Organization for Migration (IOM) joined the operation as an observer and provided technical advice. This intervention was made possible thanks to collaboration with IOM, Free The Slaves (FTS) and the Ministry of Gender Children and Social Protection (MoGCSP), and with funds from the U.S. Department of State’s Office to Monitor and Combat Trafficking in Persons (J/TIP).

The victims, between 7 to 18 years old, are originally from the Central, Volta and Greater Accra regions. The eight boys and eight girls were trafficked at different times over the past two years. They were exploited to work in the fishing industry on the Volta Lake; the females were mostly smoking fish and cooking while the males went fishing on the lake. Some of the survivors reported that they were exploited for up to two years.

Free The Slaves (FTS), together with the Ghana Police Service (GPS) and local informants, undertook surveillance, and eventually discovered the exploited group of children.

“My suspicion was high after I visited the home of the suspected trafficker when I saw the large number of children and young adults in one house," said Bismark Quartey, Senior Country Program Manager at FTS.

Following the rescue mission, the children were provided with food and refreshments, as well as nose masks and hand sanitizers to keep them safe from COVID-19. They were accommodated at a transit shelter where they received initial counselling and humanitarian support.

Representatives from IOM, the Department of Social Welfare (DSW) and Partners in Community Development Programme (PACODEP), a shelter and NGO partnering with FTS, also joined the rescue exercise.

The children are subsequently transferred to the Government Shelter in Accra for further rehabilitation. After rehabilitation, they will be reunited with their families.

The rescue mission also resulted in the arresting of the female perpetrator.

"She promised buying me and my friends sewing machines if we work for her and the husband," said a one of the trafficked girls.

Child labour and trafficking remain an issue in Ghana, especially in the fishing industry. Children of various ages and nationalities may fall victim to perpetrators.

Over the past years, IOM Ghana has worked closely with the MoGCSP, Ghana Immigration Service (GIS) and the Ghana Police Service (GPS) to counter the issue of child trafficking in the country.

“Thanks to the joint effort of all partners, this rescue mission was a success. The complex nature of trafficking in person requires strong coordination. This incidence also reconfirms that more awareness raising interventions on trafficking in person are needed in the districts and communities, to prevent the trafficking of children internally in Ghana in the first place,” said Abibatou Wane-Fall, IOM Ghana Chief of Mission.

To ensure the coordination across all stakeholders, the application of the Standard Operating Procedures to Combat Human Trafficking in Ghana, with an emphasis on child trafficking, throughout all stages of trafficking, including rescue/prosecution and protection, is crucial. The SOPs were developed by IOM in partnership with the MoGCSP and launched in October 2017. Subsequently, officers of the GPS and the Department of Social Welfare (DSW) were trained to strengthen the investigation of trafficking cases as well as to be better able to address the needs of victims once rescued.