Laughing About It : Comedy as a Way to Raise Awareness for Safe Migration 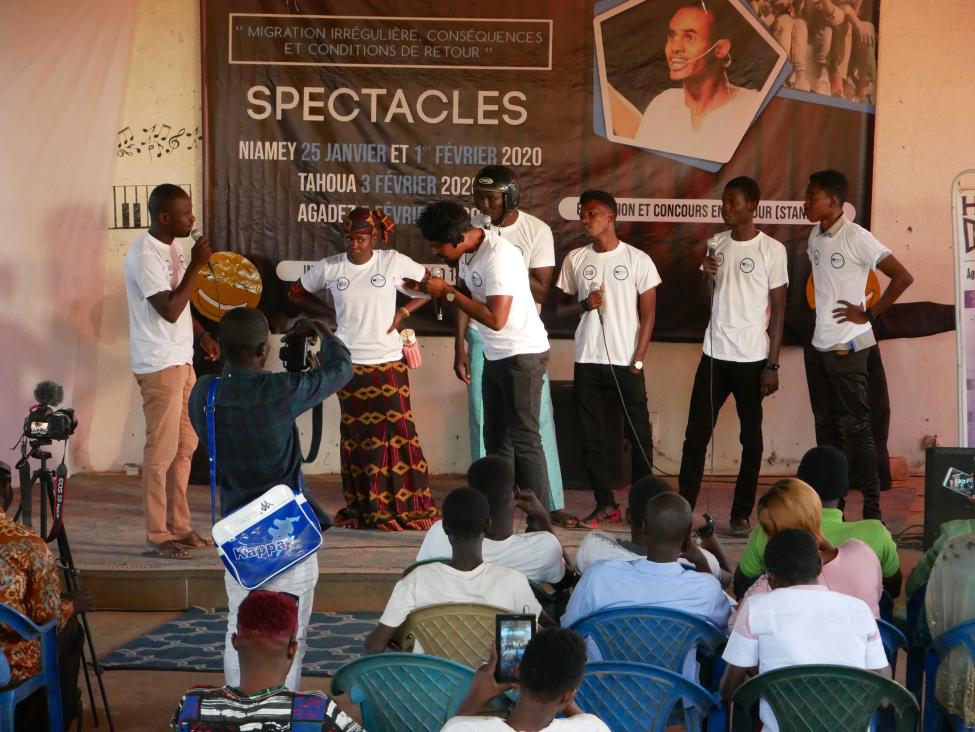 Niamey – Can we laugh about migration? That is the challenge ten comedians from Niger decided to take this month, in partnership with the International Organization for Migration (IOM).

After just a year of existence, the Haraka Comedy Club – the only comedy club in Niger – decided to promote safe migration through stand-up comedy.

The comedians visited IOM transit centres in Niamey to hear migrants’ testimonies and to be inspired to write their shows. “The testimonies were very moving,” says Wanousky Montana, one of the comedians. “This experience was really interesting; it allowed us to better understand what migrants feel and go through.”

The Haraka Comedy Club, also partnered with Kromozom, a famous comedian from Benin who coached the ten candidates who had been selected via a competition launched in January.

“Making an audience laugh when talking about a subject as sensitive as migration is a difficult task,” Kromozom explains. “You have to take a step back from the situation and be capable of delivering black humor without hurting anyone, because laughter is there to bring people together, not divide them,” he adds.

The group had five days to write their sketches and prepare their performances. On January 25, they performed in Niamey in front of a jury and an audience of over 130 people made of migrants, returnees and communities.

“We laughed a lot today! I know reality is more complicated than that, but laughter puts things in a different perspective,” explained Amadou, a migrant from Central African Republic.

“The light atmosphere that comedy creates around the subject of migration makes it possible to raise awareness about this topic in a fun and relatable manner,” said Barbara Rijks, IOM’s Chief of Mission in Niger.

Alongside Kromozom, the five winning comedians put on a one-and-a-half hour show in a matter of few days. The group then performed in Niamey, Tahoua and Agadez, reaching around 500 people with their shows.

“I am very proud because the show was a huge success,” says Ahmed Ousmane Moussa, director of the Haraka Comedy Club. “For some of the participants, it was the first time on stage. We were able to get some feedback from the migrants at the end of the show and they seemed very happy with the result – that was the most important thing for us.”

In the framework of the EU-IOM Joint Initiative for Migrant Protection and Reintegration, IOM’s Regional Office for West and Central Africa launched a call for proposals in 2019 to raise awareness about safe and regular migration in innovative ways. One of the chosen initiatives was a stand-up competition for young comedians, organized by the Haraka Comedy Club in Niger.

IOM awareness-raising activities use a human-centered approach to increase the social cohesion between migrants in transit, returnees and community members.