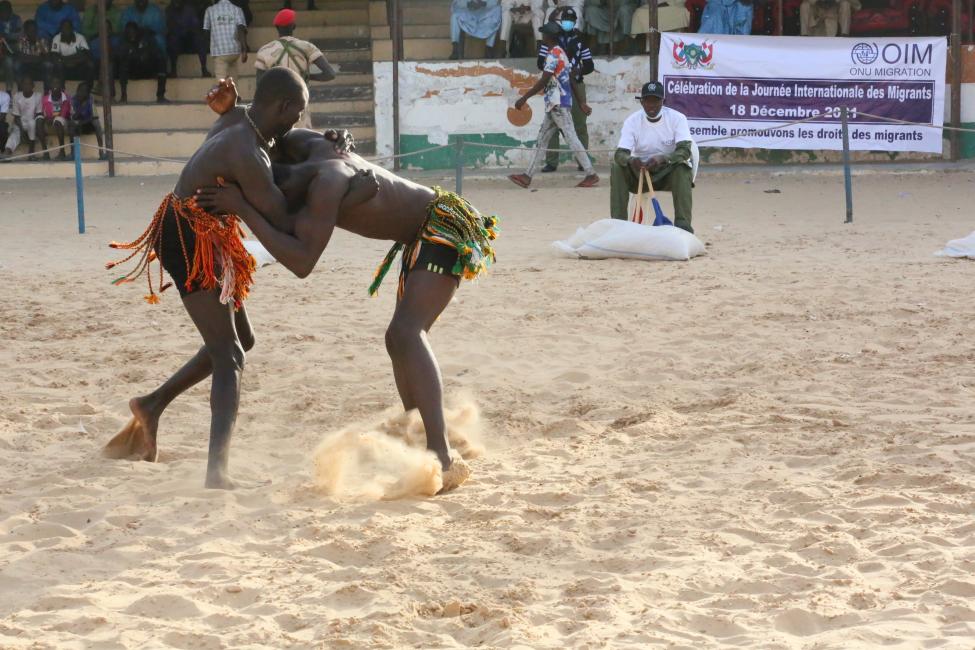 As part of IMD 2021 and Niger's Republic Day celebrated in Diffa, IOM supported the organization of a traditional fighting competition from 15 to 16 December which mobilized 20 fighters competing for the trophy and more than 250 spectators.
Photo: IOM Niger 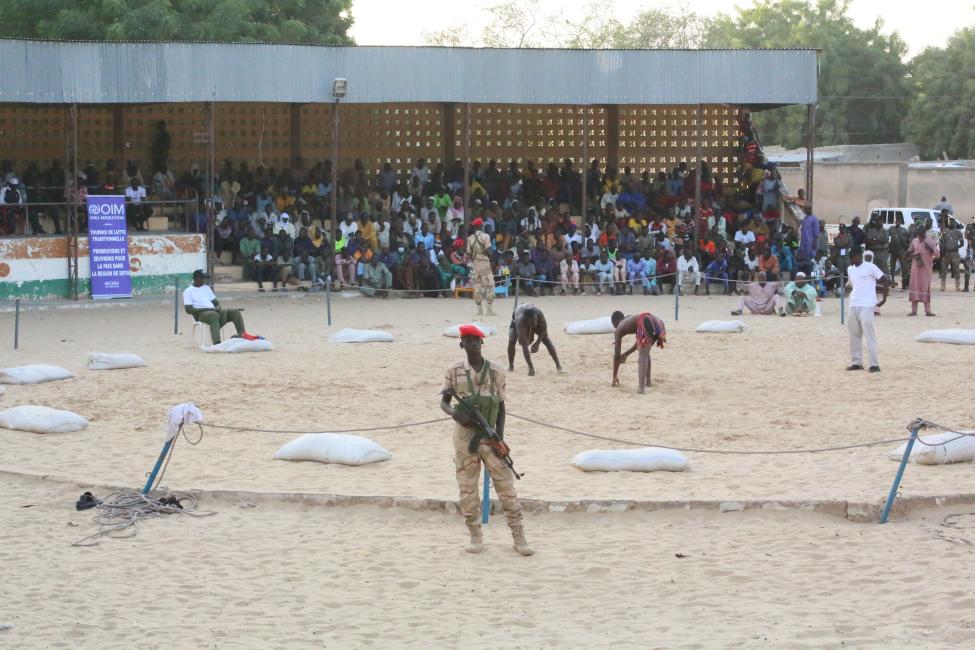 As part of IMD 2021 and Niger's Republic Day celebrated in Diffa, IOM supported the organization of a traditional fighting competition from 15 to 16 December which mobilized 20 fighters competing for the trophy and more than 250 spectators.
Photo: IOM Niger

Diffa – On the occasion of the celebration of the 63rd edition of the proclamation of the Republic in Niger on 18 December in Diffa, the International Organization for Migration (IOM) in Niger co-organized, with the Governorate of Diffa, a series of activities to promote social cohesion and cultural diversity from 13 to 17 December 2021.

As this holiday coincides with the International Migrants Day, also celebrated on 18 December, the activities organized had as main theme migration, peace, and social cohesion, especially in Diffa which hosts many displaced persons.

Forty community leaders and cultural artists, dressed by IOM, paraded on 13 December at the opening ceremony of the sports and cultural activities attended by over 5,000 people, including Niger's Prime Minister and local authorities.

A cash-for-work cleaning activity was organized on 14 December in four districts of Diffa. Thirty-five people, including 20 women and 15 men, participated in this activity. In addition, IOM and local authorities organized an awareness-raising campaign on hygiene, COVID-19 preventive measures, and peaceful coexistence on 15 December that reached 550 people in Diffa town.

IOM also supported the organization of a traditional fighting competition from 15 to 16 December, entitled; "The Governor's Tournament," which mobilized 20 fighters competing for the trophy and more than 250 spectators.

"Such activities permit to strengthen peaceful coexistence and solidarity between communities", says Godi Yahya, the Secretary-General of the Governor of Diffa.“We thank IOM for the work they do in our region. They carry out livelihoods and peacebuilding activities that change the lives of our communities and contribute to consolidating peace and resilience”, he adds.

Eighteen December, the date of the proclamation of the Republic, is celebrated in turn in the regional capitals of Niger. It allows the host cities to be equipped with new infrastructure and cultural facilities and promotes peace and social cohesion, particularly in areas affected by conflict. Each edition also includes activities to raise public awareness of the importance of cultural diversity.

"We are delighted to support this activity which coincides with Migrants' Day. This collaboration is a perfect reflection of our joint effort on the ground to promote the well-being of the displaced and host communities and peace and social cohesion in this region. Together, we are achieving more," says Barbara Rijks, IOM Niger's Chief of Mission.

As part of its emergency response to the displaced people and communities in the Diffa region, IOM Niger has been working with the government and local authorities to strengthen resilience and peaceful coexistence among communities.

These activities were implemented with funding from the German Federal Foreign Office (GFFO).