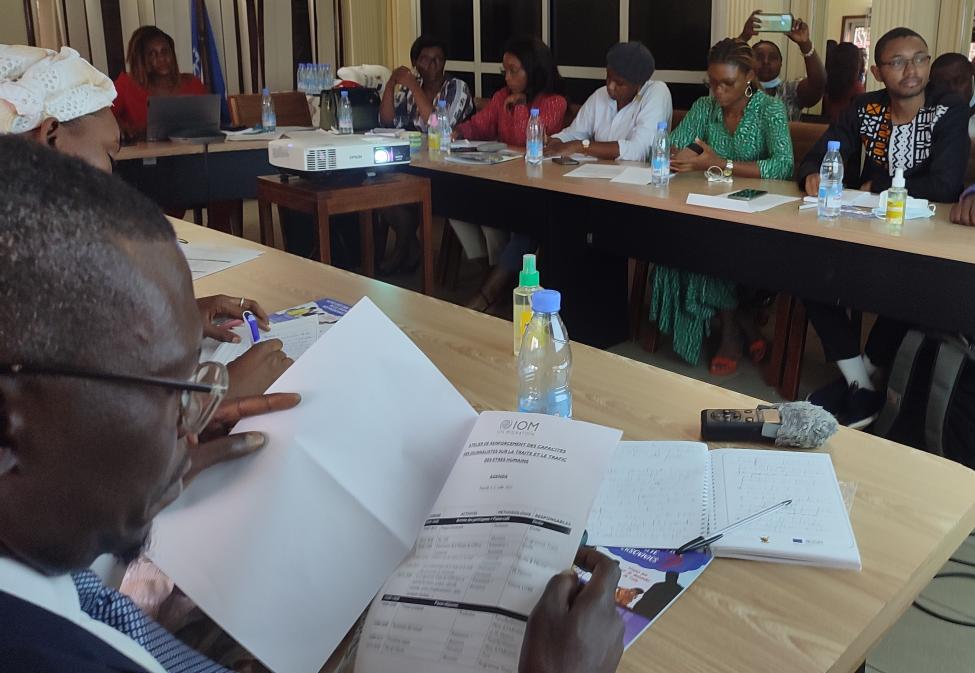 Yaoundé – The availability of this toll-free number for Cameroon was announced as part of actions implemented by IOM to fight against the phenomenon. Fifteen journalists took part in a capacity-building workshop conducted by IOM Cameroon on 21 July 2022 in Yaoundé. Through this initiative in the run-up to the celebration of the World Day against Trafficking in Persons on July 30, the International Organization for Migration (IOM) intended to involve the media in this battle which is little known to the Cameroonian public.

This workshop highlighted that irregular migration is closely linked to trafficking and smuggling of human beings. Young people who embark on this dangerous adventure often end up being victims of trafficking. The main causes mentioned include poverty, social and economic disparities, the search for better livelihoods abroad, as well as conflicts or natural disasters. Furthermore, in Cameroon, many children under the care of guardians are abused and exploited due to their weakness, vulnerability, and inability to defend themselves.

Some programmes implemented by IOM since 2009 to support the Government of Cameroon aim at effectively combating trafficking and smuggling of human beings and assisting the victims. Within this framework, as mentioned by Tatiana Lobe, Project Officer, IOM has implemented projects that have resulted, among others, in the publication of a counselling manual for victims of trafficking in persons; establishment of a toll-free number, 1503, for reporting cases of trafficking in persons; facilitation of the voluntary return of about 6,000 irregular Cameroonian migrants; support for the economic, social and/or psychosocial reintegration of 4,000 of them; rehabilitation and equipping of a temporary reception centre for voluntary returnees; several capacity building activities for state actors involved in the fight against trafficking and smuggling. In a bid to “Prevent, Protect and Prosecute” as underlined by the theme chosen by IOM in its awareness campaign for this edition, it is important to have a good grasp of the legal framework in this field in Cameroon.

Strengthening Land Border Security: Togo Soon to Have a Border Control Post at Pogno in the Prefecture of West Kpendjal